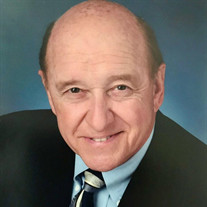 Alexander Scott Logan, 81, died on April 28, 2021 at his home in Fort Myers, Florida from complications of long-standing heart disease. He was born on May 14, 1939 in Harrisburg, Pennsylvania, the son of Drs. Edward Bates and Louisette (Reichenburg) Logan. He graduated from Susquehanna High School in 1956 and The U.S. Naval Academy in 1960. He furthered his education at The University of Pennsylvania Law School, The College of Financial Planning, and Boston University School of Law, and was a litigation attorney before becoming involved in the world of finance. As a graduate of the U.S. Naval Academy, Scott spent 4 years on active duty with the U.S. Navy, then transitioned to the Navy Reserves. He held positions on several destroyers including Weapons Officer, Chief Engineer, Executive Officer and Commanding Officer as well as Commanding Officer assignments on Coastal and Ocean-going Minesweepers. He was especially proud of his assignments as Commander of the Icelandic Defense Force, Commander of the Maritime Prepositioning Force, and Deputy Commander of the Naval Surface Forces, Atlantic. After 37 years with the Navy Scott retired in 1993 as a two star Rear Admiral. While he continued his career with the Navy Reserves, he began to simultaneously work in financial services, a career that spanned more than 40 years, with an emphasis on retirement plans, variable annuities, and mutual funds. He started as in-house counsel and compliance attorney for J&W Seligman Co, and from there he went on to become a Vice President of Massachusetts Financial Services (MFS), where he was responsible for Financial Plans and Services. In 1986, Scott partnered with H. Douglas Wood to form Wood Logan Associates, Inc., an independent wholesale marketing and sales organization dedicated to the distribution of variable annuities. As he left official work and proclaimed, “I’m going fishing and I’m not coming back,” Scott really didn’t retire, but instead became engaged in a number of endeavors involving the financial services industry, the U.S. Navy, and personal business. One of his interests involved being a founding member of the National Association for Variable Annuities (NAVA), to which he was inducted into the NAVA Hall of Fame in 1999. Other new ventures involved acquiring a ranch in Florida to grow oranges and raise beef, and buying a mountain in North Carolina to develop. Scott’s well-worn daily planner was still being actively used in his final days. Scott rounded out his life by actively participating in the work of a number of charitable organizations. In addition to serving as a director on several nonprofit boards, his most notable collaboration was with the National Multiple Sclerosis Society. He was honored to be the recipient of the MS Society Hope Award in 1999 for his significant work and contributions toward the research and treatment of Multiple Sclerosis. Scott is survived by his wife Susan (Thompson) Logan and his sons Dr. Kent Logan and his wife Kathleen and grandson Alexander of Portsmouth, NH, and Lance Logan and his wife Jennie and granddaughter Lauren of Fort Myers, FL. He is also survived by his sister Diane de Terra and his nephew Luc Logan of Burlington, VT; and step-daughter Samantha Didio and her husband James and their children James and Gemma of Fort Myers, FL. Scott was predeceased by his first wife Shirley (Yontz) Logan in 1991, with whom he raised his two sons in Scituate, MA, and by his grandson, Brody Logan, who died in 2011. In lieu of funeral services, and to honor Scott, memorial donations may be made to The Little Red Wagon Fund at Golisano Children's Hospital of Southwest Florida in memory of Brody MacKnight Logan at leehealthfoundation.org

Alexander Scott Logan, 81, died on April 28, 2021 at his home in Fort Myers, Florida from complications of long-standing heart disease. He was born on May 14, 1939 in Harrisburg, Pennsylvania, the son of Drs. Edward Bates and Louisette (Reichenburg)... View Obituary & Service Information

The family of Alexander Scott Logan created this Life Tributes page to make it easy to share your memories.

Send flowers to the Logan family.