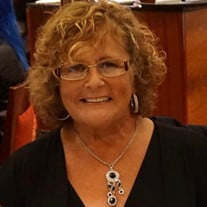 Anne L. (Orzetti) Perozzi was born in Bradford, PA to James J. Orzetti and Lucille (Cappello) Orzetti on July 10, 1940. She battled a massive brain aneurysm that ultimately claimed her life on Feb. 20, 2022. Anne graduated from Bradford high school in 1958 and a year later received a Business Administrative Secretary Certification from Bryant & Stratton Business School. She moved to Rochester, NY where she met her devoted husband, Frank J. Perozzi, while working at General Dynamics. They were married for 50 years until his death in 2018. Anne is survived by her son Brett (Teri) Perozzi of Ogden, Utah, daughter Claudia Perozzi (Jack) Raynal of Estero, Florida, son Joseph (Jan) Perozzi, of Cape Coral, Florida, brother, James J. (Nancy) Orzetti, of Bradford, Pennsylvania, and many cousins, nieces, and nephews. Anne worked in many professional roles throughout her life, including employment with the federal government, a secret “defense contracting” position, and with a well-known local attorney. Anne was fun-loving, gregarious, and had a quick and infectious laugh. She was always active, social, and had a great sense of humor. She was an attractive, classy, well dressed stylish woman. Anne was always a strong and determined woman, even defying the odds related to her aneurysm and baffling her neurosurgeons. Anne enjoyed crafts of all sorts and produced many amazing pieces over the years that remain in the family. She was also a tireless animal advocate, donating and volunteering for decades with the ASPCA and fostering kittens (primarily) and puppies. She was an avid coffee drinker and liked to relax with a cup whenever possible. She disliked the cold and snow of Upstate NY, thus spending the last years of her life in Southwest Florida. A celebration of her life will be held in Rochester, NY at a later date. Her internment will be in Oakfield, NY at St. Cecelia’s Cemetery, where she will rejoin her husband. In lieu of flowers, donations may be made in her memory to ASPCA https://secure.aspca.org/donate/ps-memory-sl-p1?ds_rl=1066461&ms=MP_PMK_BingbrandMemorialSL-T4&initialms=MP_PMK_BingbrandMemorialSL-T4&pcode=WEBMEMORYSLPPC&msclkid=08786ac6084e1a228dd408df03110b4b&gclid=08786ac6084e1a228dd408df03110b4b&gclsrc=3p.ds or the Alzheimer's Association | Donate to Fight Alzheimer's Disease https://act.alz.org/site/Donation2?df_id=49260&mfc_pref=T&49260.donation=form1&mfc_pref=T&32112.donation=&utm_source=bing&utm_medium=paidsearch&utm_campaign=giving-bing&s_src=giving-bing&msclkid=d5620d9a94311e8e401e6f83b02c7ff3

The family of Anne Louise Perozzi created this Life Tributes page to make it easy to share your memories.

Send flowers to the Perozzi family.