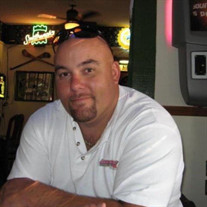 Daniel Robert Lee was born on July 16, 1974 to Robert and Florence Lee in Ogden, Utah. He was the youngest of five children and was a happy and fun loving kid. His father's occupation allowed their family to live in several parts of the nation (Lewistown, Montana, Reno, Nevada, Bar Harbor, Maine, which was his favorite place). Then finally Cape Coral, FL in 1989. Daniel was enrolled at Cape Coral High School, where he met Stacey Ruffo. A few years after high school the two were married, and then their first and only child Connor Daniel Lee was born. Connor was the center of their lives and brought as much joy to everyone. In 2005, a cute young blonde caught his eye, Cindy Lou had him at "Hello". The two went on their first date and they were inseparable and insanely happy ever since. Cindy was adored by Dan, she was the love of his life. In 2014, the couple had a laid back weekend beach wedding with their closest friends and family. It was a special and long awaited event by all their tight group of friends (whom they call their family). The memories they have made will last a lifetime. Dan and Cindy are blessed with an incredible group of friends that are more like family and meant the world to Dan. According to his sister Darcee, Dan was a fun, happy and playful child. Dan never met a stranger, he could talk to anyone no matter what their station in life, and treated others with respect, especially veterans and law enforcement. He loved veterans and always went out of his way to show them respect and he made sure to pass that importance onto his son. Dan was incredibly generous, always picking up the bill for all of his friends when they would go out to eat and would anonymously pick up the tabs for military veterans. He would mow the elderly neighbor's lawn, but his friends gifts for no reason, and do anything for his favorite mother-in-laws, Sandy Ruffo and Ina Willis. His heart was huge, he looked like a big bear, but he was a teddy bear inside. He wanted the world to be a better place, he fought for what was right and was one of America's finest, a true red, white and blue patriot. Dan was bold about his convictions and loved this great country. He loved motorcycle riding, hunting, fishing and traveling. Dan had a work ethic that did not quit, He started working hard in his teens and as an adult worked in the construction industry and also with Home Depot where he met wonderful lifelong friends. His final job at D.R. Horton was his favorite of them all and he loved it! Dan is survived by the love of his life Cindy Lee, his son Connor Lee, his mother Florence Lee, siblings Sandra Lutz (Perry), Jeff Lee, Lenny (Charlene) Lee, and Darcee Lee-Wessinger (Mark). A celebration of life will be planned at a later date.

Daniel Robert Lee was born on July 16, 1974 to Robert and Florence Lee in Ogden, Utah. He was the youngest of five children and was a happy and fun loving kid. His father's occupation allowed their family to live in several parts of the nation... View Obituary & Service Information

The family of Daniel Robert Lee created this Life Tributes page to make it easy to share your memories.

Send flowers to the Lee family.