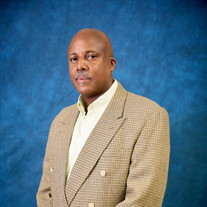 Name: Capt. Elgin O’D. C. Swapp, MSc, AFNI (“Junior/Bertie/Poo”) Born : August 16, 1961 Place of Birth: Claremont, St. Ann, Jamaica Faith: Methodist. Recommitted his life to Christ with gratitude for all God had done for him and his family and never questioning why he was afflicted with the disease. Associations: Associate Fellow of the Nautical Institute, Domino School (Trinidad Chapter) and Association of Jamaicans in Trinidad and Tobago Passed in perfect peace on: January 25, 2022 Place of Death: Lehigh Acres, Florida at Bruce & Diedre’s home where he loves to visit Illness: Stage 4 Pancreatic Cancer Age: 60 Residence: Trinidad and Tobago Wife: Camile Swapp Daughters: Shara Morris & Anya Swapp Father: Elgin Swapp deceased Mother: Eda Swapp deceased Sisters: Judith Swapp O’Neill & Allyson Swapp Warren Brother: Charles Swapp Nieces: Leigh-Ann O’Neill deceased & Stephanie O’Neill Passion: Marine Piloting Hobbies: Gardening- loved orchids especially, Listening to music (Reggae, Jazz, Calypso, Parang), Travelling Skills: Master Chef, Artisan, Poet Personality: Elgin was a man of action and few words but when he spoke it was always meaningful. He was independent, loving, faithful, and dedicated to family and friends. He valued putting family before himself, and was a giver and teacher. He was known for his strength. Elgin was duty-bound in his professional life and encouraged people to work at optimum levels. He would also search out opportunities for their development and advancement. Education, Profession & Family Life Elgin attended Claremont Primary School, then Ferncourt High School, both in St. Ann, Jamaica from which he graduated and then worked at the National Commercial Bank. He was awarded a scholarship to attend the Jamaica Maritime Training Institute for Navigational Maritime Sciences. He graduated and started working on ocean liners as a navigator. Elgin then acquired his Captain License, becoming a Master Mariner. As a captain he traveled the world’s seas visiting about 50 countries. Captain Swapp then decided to stay on land after meeting Camile Fray. Elgin was married by his cousin Rev. Bruce Swapp to Camile in June 1996, and became father to Shara Morris. Then later Shara became a sister when Camile and Elgin gave birth to Anya Swapp. Elgin subsequently began lecturing at his Alma Mater, Caribbean Maritime Institute, and then was awarded a scholarship to further his studies at the World Maritime University Graduate School in Sweden where he attained an MSc in Maritime Training and Education. After, Elgin returned to Jamaica, he accepted the position of Senior Lecturer at the Caribbean Maritime Institute as the Head of the Nautical Department. Starting a new chapter, Elgin then moved with his family to Trinidad and Tobago where he was enlisted by the Govt. to join the academic staff at the University of Trinidad and Tobago (UTT) as an Assistant Professor. On completion of that assignment, Captain Swapp was selected to join the Trinidad and Tobago Marine Pilots’ Association, thereby fulfilling his young adulthood passion of becoming a Marine Pilot. Funeral Details: Elgin’s body will be blessed on January 28, 2022 at Christ United Methodist Church, Lehigh Acres Florida. After he will be cremated and buried in Beechamville, St. Ann, Jamaica. Some of his ashes will be taken to Trinidad and Tobago and scattered at sea. Elgin Swapp Jr. will be dearly missed by his family,

The family of Elgin O'Dwyer Chippendale Swapp created this Life Tributes page to make it easy to share your memories.

Send flowers to the Swapp family.