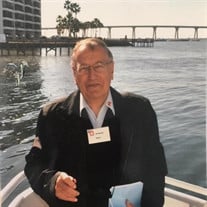 Hermann Gabriel Baud, Jan 18, 1940 – December 10, 2021 Born as the eldest son to Hermann and Margareth Baud in rural Azmoos, Switzerland, where he spent a happy and active childhood with his three siblings. After an apprenticeship as druggist he went to a college of higher education to get his Master Degree, where he met his wife Marianne Baud, who also studied to be a druggist. Together they were managing several drugstores at different cities in Switzerland. In 1968 they moved to the mountain and skiing village of Flims, where they lived for almost 40 years and their kids Andreas and Suzanne were born. Herman engaged in different businesses, some more, some less successful, but he always was interested in trying something new and beeing a pioneer. He did a lot of military service, as lieutenant-colonel with the chemical warefare division and also took over many voluntary positions in the community and as board member or president of Lions Club and the druggist association. Herman was very interested in alternative medicine and healthy nutrition, but also languages and politics, and an avid reader. Always big travellers, in the 1990s the adventure USA started with frequent visits and a green card, leading to their emigration to Lehigh Acres, FL, after their retirement in 2006. Always being restles, Herman continued to try out different jobs and in his freetime joined the Swiss American Club of Southwest Florida. He was elected to the Board in 2009 and served as Treasurer until 2015. He loved this link between his two homes and attended almost every event. He also presided for years very committed the Golfview Manor condo association where he lived. On Dec. 10, 2021, Herman transitioned quietly in Hope Hospice in Lehigh Acres, Florida, after a short illness. We are consoled, that his suffering was of short duration and will remember his easygoing personality and his sense of humor.

Hermann Gabriel Baud, Jan 18, 1940 &#8211; December 10, 2021 Born as the eldest son to Hermann and Margareth Baud in rural Azmoos, Switzerland, where he spent a happy and active childhood with his three siblings. After an apprenticeship as druggist... View Obituary & Service Information

The family of Herman Gabriel Baud created this Life Tributes page to make it easy to share your memories.

Send flowers to the Baud family.