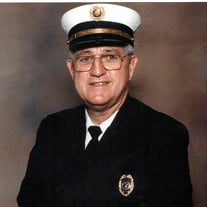 James Lee Jones passed away on September 5, 2021 in Clearwater, Fl. He was a native of Naples, Florida, born on April 1, 1938. He moved to Crystal River in 2004 and then Clearwater in 2020. After graduating from Naples High in 1956, Jim was in the Navy and the Navy Reserves.He began working at the City of Naples Fire Department in 1960 and became the first paid firefighter in the City of Naples the day after Hurricane Donna passed through. Jim graduated from Oklahoma State University in 1970 with a degree in Fire Protection Technology. He worked for North Naples Fire District from 1971 through 1997, where he became Chief of the department in 1978. His badge number was #2.Jim was known as a true southerner with a big heart and great sense of humor. He was a gifted story teller with a wealth of knowledge about Naples history. Jim made friends wherever he went and was always ready to banter or share a story with whoever he met. He loved helping others and serving his community. He was a long time member of North Naples United Methodist Church, Pelican Bay Rotary Club, Kings Bay Rotary Cub in Crystal River and The Cypress Masonic Lodge. He was a major force in helping to get fire trucks, equipment and training to Guatemalan Fire Departments in need. He visited Guatemala several times to help with deliveries and training. Jim was very involved with the Brotherhood Ride and traveled with them as part of the Support Team. He also volunteered with Relay for Life for years. Jim enjoyed traveling and went all over the world, including many trips in his RV, visiting all 50 states. He loved his family and was very proud of his children and grandchildren. Jim is survived by his wife Becky, children Jimmy (Sally) Jones and Zak Jones (Jules Wallace),Troy Shields, Tiffany (Chris) Holland, Tarah (Joseph) Cornelius, grandchildren Emilie (Joe) Derrick, Jessica (Jon) Kalvin, Kyle (Lindsey) Goode, D’Artagnon, Lydia, Preston, Mia, Braden, Elliot and Kaia, great grandchildren Freya and Leo, his brother Duane (Cheryl) Jones, and many other family and friends. He is preceded in death by his parents Jesse and Ethel Jones, his brothers Rudy Fuller and Wayne Jones, his first wife Sue, his son David Jones and his grandson Troy Goode. A Celebration of Life will be held on Saturday, September 25 at 1:00 p.m. at the First Baptist Church of Naples, 3000 Orange Blossom Dr., Naples, Fl. 34109.In lieu of flowers, memorial donations may be made to The Brotherhood Ride in Jim’s memory. Please use the following link. http://www.brotherhoodride.com/support-team-member/chief-jimjones/

The family of James Lee Jones created this Life Tributes page to make it easy to share your memories.

Send flowers to the Jones family.