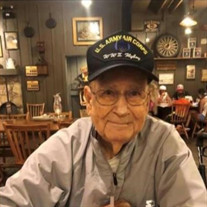 John Mitchell Reider, Jr, CMSgt USAF (Ret) lovingly known as Pop, passed away peacefully at home on November 24, 2021. Pop was born March 27, 1924 to John Mitchell Rieder, Sr and Lillian Walker Rieder in Birmingham, AL. Pop grew up in central Ill. He began his long military career at age 16 by first joining the CCC, Civilian Conservation Corps, then enlisting in the Army Air Corps after the attack on Pearl Harbor. He started his career as a Combat Arms Instructor at Buckingham Field, FL where he met his future wife Lois. He served as a Turret Gunner on an A-20 aircraft in the Pacific during WWII. Pop eventually transitioned to aircraft maintenance as a career in the Air Force where he helped develop the first jet engine technical manuals. Pop enjoyed traveling the world while raising his family with his beloved wife. After over 31 years of service he retired to Ft Myers, FL with his family. He was a proud Veteran of WWII, Korea and Vietnam. Pop never met anyone he considered a stranger and had the brightest smile for everyone. He loved to share stories about his military career and his greatest joy was being with his family. Pop was loved by all and he will be greatly missed as the patriarch of the family and his friends. Pop was preceded in death by his parents, his wife of 67 years, Lois, his daughter Sharon and his granddaughter Rebecca. He is survived by his children Terrell (Tina) Reider, Karen (Barry) Olson, Gary (Mary) Reider, Barry (Deanna) Reider, Harry (Dawn) Reider and Marian (James) Edmonson, 19 grandchildren, 30 great grandchildren, and 2 great great grandchildren. Visitation is Dec 2, 2021 from 6 to 7 pm. Services will start at 7 pm. Gendron Funeral Home, 2701 Lee Blvd, Lehigh Acres Burial will take place at the Sarasota National Cemetery in Sarasota, FL on Dec. 15, 2021.

The family of John Mitchell Reider Jr created this Life Tributes page to make it easy to share your memories.

Send flowers to the Reider family.