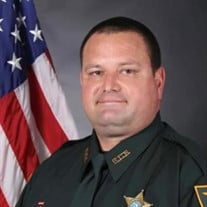 Joshua Joseph Welge, 43, was born September 30, 1978 in Port Charlotte, FL. He is the son of the late Teresa Huffman. As a child, Josh lived in many different places. He and his parents ran a children’s home in Texas. As he grew older, Josh’s dad joined the Army and he had the opportunity to live on Fort Monroe Army Base in Virginia. When Josh was in middle school, he and his mom moved back to Englewood, FL. He attended Lemon Bay High School and then later graduated from Venice High School. Josh met his wife, Brandi, when he was sixteen and they were high school sweethearts. They married in 1999 and settled here where they grew up in Venice. Josh began working at the Sarasota County Sheriff’s Office in Corrections. Two years later, he started working at Venice Police Department. While there, he was on the Emergency Response Team and excelled as a law enforcement officer. He served there for five years before returning to the Sheriff’s Department. He spent the last seventeen years as a deputy as well as a Field Training Officer. He was an excellent marksman and earned a Life Saving Award. Josh and Brandi have three children. He was an amazing father and husband. His big heart and loyalty made him a true friend to many people. His legacy will live on and he will be desperately missed. Josh is survived by his loving wife, Brandi; three children, Colynn, Symantha and Tobey; grandmother, Judy Howell; brother-in-law, Casey Taylor and family, father and mother-in-law, Lynn and Anne Taylor; father, Jerry Welge and many aunts, uncles and cousins. End of Watch Joshua, rest easy and we will take it from here. We love you. On Saturday, October 30, 2021 a visitation will be held at the Venice Church of the Nazarene, Venice, FL from 9:30a-11a. A funeral service will start at 11a followed by burial at Venice Memorial Gardens, Venice, FL. Arrangements are under the care of Gendron Funeral & Cremation Services Inc. located at 14538 Tamiami Trail, North Port, FL 34287. 941-423-9110 www.gendronfuneralhome.com

Joshua Joseph Welge, 43, was born September 30, 1978 in Port Charlotte, FL. He is the son of the late Teresa Huffman. As a child, Josh lived in many different places. He and his parents ran a children&#8217;s home in Texas. As he grew older,... View Obituary & Service Information

The family of Joshua Joseph Welge created this Life Tributes page to make it easy to share your memories.

Send flowers to the Welge family.