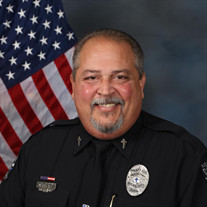 Not sure what to send?

Michael Alan Saxton, 51, was born January 20, 1971 in Corning, NY to Tom and Patricia Saxton. Michael died peacefully at Sarasota Memorial Hospital surrounded by his family and close friends on May 10, 2022. Michael served in the United States Air Force in Operation Desert Storm as a Military Police Officer. He then went on to serve his community with the North Port Police Department and the Sarasota Police Academy. Michael retired in 2016 from North Port Police Department and began ministering with multiple churches within the community and later became the chaplain with North Port Police Department. Michael’s passions were serving his community and spreading the Word of God. He spent his free time with his family and friends, riding with his motorcycle group, Redeemed Motorcycle Ministry, enjoying a cigar and coffee, and studying God’s word. Above all else, Michael cherished the time that he had with his grandchildren. Michael is survived by his loving wife, Kati Saxton, his children Michael (Ellen) Saxton, Victoria (Devon Kapusta) Saxton, Kendall (Chris) Holley, Kelley (Coty) Werley, Madison Bartlett, Ashtyn Bartlett, Jacob Bartlett and his grandchildren, Theodora Saxton, Colton Holley, Ethan Holley, Raiden Bartlett, Owen Werley, and Baby Girl Werley. He is also survived by his sisters, Tracy Seyler and Tammy Lefebvre; uncle Bob (Kathleen) Cole and many nieces and nephews. Michael is predeceased by his daughter Amanda Rae Saxton. A Visitation will be held Monday May 16, 2022 from 4p-8p at Foundation Church in North Port, FL. A Funeral Service will be held Tuesday May 17, 2022 at 11a at the Foundation Church. A military service will be held Tuesday May 24, 2022 at 11a at Sarasota National Cemetery. In Lieu of flowers, the family is asking for donations to be made to the North Port Police Officer’s Association Chaplain Fund. The check can be made out to NPPOA and mailed to 4980 City Hall Blvd, North Port, FL 34286. Arrangements are under the care of Gendron Funeral & Cremation Services Inc. located at 14538 Tamiami Trail, North Port, FL 34287. 941-423-9110 www.gendronfuneralhome.com

Michael Alan Saxton, 51, was born January 20, 1971 in Corning, NY to Tom and Patricia Saxton. Michael died peacefully at Sarasota Memorial Hospital surrounded by his family and close friends on May 10, 2022. Michael served in the United States... View Obituary & Service Information

The family of Michael Alan Saxton created this Life Tributes page to make it easy to share your memories.