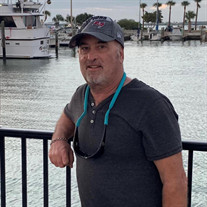 Perry arrived &#8220;home" eternally on July 20th 2021 at 60 years of age to meet his Lord and Savior Jesus Christ. He died peacefully at home surrounded by his loving family who unbeknownst to themselves were gifted caretakers able to meet... View Obituary & Service Information

The family of Perry Alan Levinson created this Life Tributes page to make it easy to share your memories.

Send flowers to the Levinson family.