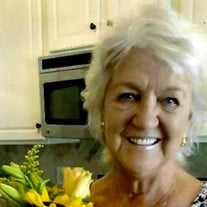 Phyllis Ann Austin, 79 years old was escorted by our Heavenly Father to his Glorious Kingdom on Monday January 24, 2022, at 720 am. She was born in Jonesboro Arkansas on October 17, 1942, to Leon and Elsie Austin. Her family relocated to Lansing Michigan where she was raised and later raised her own family. Phyllis never missed an opportunity to “lovingly” mother the kids in the neighborhood, friends of her children, nieces, or nephews. Her care for others extended to the kids at the schools she volunteered at over the years, or whoever else crossed her path! She offered advice, comfort, encouragement, and a listening ear when someone needed it. Phyllis loved being a “Welcome Volunteer” at her home church, Grace Bible Church of Houston. She was an original “Mama Bear” wherever she went. Phyllis’s greatest legacy was the children she raised to love the Lord, to forgive friend and foe, to be kind and loving to others, to be honest hard workers, and never pass judgement on those less fortunate. She encouraged her children to never be afraid to try new things. Her coin phrase "Can’t never did anything” was a reminder to many that it was better to try than not do anything at all. Often you could find her dancing to country music with her family and friends as this was a “Family Tradition.” Phyllis is survived by her siblings Sister Glenda Morehouse (Terry), Brother Bob Austin (Jolene), Sister Kathy Brown (Kevin), Brother Christopher Beauchamp (Kim), Sister Susan Elliot (Gary), Brother Leon Austin (Sharron); her children and their families: Son Frank Gargett Jr, Daughter Annette Gargett (Rene), Son Rick Gargett, Daughter Carolyn Neal (Kevin), Daughter Angela Shattuck (Tim), and Son William Ward, and second husband and friend John Ward. Her Grand children: Matthew Shattuck (Jessica), Paige Bush (Evan), Derek Gargett (Paige), Justin Gargett, and their mother Sandy, Ryan Gargett and his mother Michelle, Hanah Neal Hockley (Wyatt), Rachel Neal, Jacob Eissler, and graciously “adopted” by Hanah’s best friend Tana as her grandmother as well. Also her Great Grandchildren Connor and Mason of Matt’s family, Nyla, Avery, and Cameron, Charlotte, Oliva Story of Paige’s family and one on the way from Derek’s family. She was relieved of her suffering and reunited in a glorious celebration with her Father Leon Austin (Kay), Mother Elsie Boyer Williams, Brother LV Austin and wife Jean, Sister Patricia Thompson, Brother Johnny Beauchamp, Grandsons Daniel and Timothy Hernandez, Granddaughter Ashlee Gargett, her first husband and friend Frank Gargett, Son in Law Kevin Neal, nephews Jack Jr, Darrin, Shawn, Jason, niece Deana, great- niece Santonka, great nephew Josh, Aunts, Uncles, and friends. Phyllis considered herself blessed to have such a wonderful loving family of siblings (in-laws), children (in-laws), grandchildren, great grandchildren, nieces, nephews, friends, and even grand dogs! Our mother was an original and will never be forgotten by those who knew her. We love you Mom, mother, sis, sister, Gigi Phyllis, Aunt Phyll, Miss Phyllis, even “Old Bat” (Only by Kevin). We are rested in assurance that you are at peace in heaven with our Loving Redeemer and we will be re-united with you at our appointed time. Until then... Rest in Heaven Mom, Phyllis Ann Austin. Memorial will be held at Mill Creek Baptist Church 12317 Upper Manatee River Road, Bradenton Fl 34212 February 13, 2022, at 2:00pm Arrangements are under the care of Gendron Funeral & Cremation Services Inc. located at 135 N Lime Avenue, Sarasota, FL 34237. 941-365-1767 www.gendronfuneralhome.com

Phyllis Ann Austin, 79 years old was escorted by our Heavenly Father to his Glorious Kingdom on Monday January 24, 2022, at 720 am. She was born in Jonesboro Arkansas on October 17, 1942, to Leon and Elsie Austin. Her family relocated to Lansing... View Obituary & Service Information

The family of Phyllis Ann Austin created this Life Tributes page to make it easy to share your memories.

Phyllis Ann Austin, 79 years old was escorted by our Heavenly...

Send flowers to the Austin family.