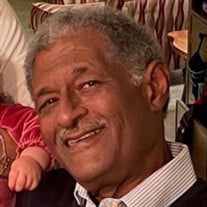 Richard A Mahurt, 73, died peacefully at home March 15, 2022. He was born August 19, 1948 in East Liverpool, Ohio, grew up in Midland, PA and was a long-time resident of St. Croix, US Virgin Islands. He was preceded in death by his parents, James and Willa Mahurt, and nephew Spencer Mahurt. Richard was an accomplished athlete having been a member of the 1965 Lincoln High School Pennsylvania state championship basketball team. In 1967, he was the co-MVP of the Midwestern Athletic Conference and an all-WPIAL selection in football. He played football for Pennsylvania against Texas in the Big 33 game his senior season. He then enrolled in Purdue University on a full athletic scholarship and graduated in 1972. Richard and his wife, Sarah, moved to St. Croix in 1977, where he had a career in Human Resources in the Virgin Islands Government and over 30 years with HOVIC and Hovensa. He was also co-owner of the Fort Christian Brew Pub for many years. He leaves to mourn his passing, his beloved wife of 45 years, Sarah Fleming Mahurt, a daughter and son-in-law, Darcy and Duncan Morel, Erie, CO; and a son and daughter-in-law, Matthew and Kristen Mahurt, Fort Myers, FL. He also leaves a sister and brother-in-law, Tracy and Kevin Butler, Fairfax, VA; and a brother and sister-in-law, James and Charlotte Mahurt, Carollton, TX. He is survived by four adoring grandchildren, Sawyer and Cruz Morel and Selah and Sasha Mahurt, nieces and nephews Emily Carter, Eric Carter, Joe Slappy, Aminah Butler, Logan Mahurt, and many other relatives and friends. In lieu of flowers, contributions can be made to the Leroy Keyes Athletics Leadership Fellowship at Purdue University or the Purdue University Center for Cancer Research. Please note that you are paying tribute to Richard Mahurt ‘72 and that you’d like notification of your gift to be given to Sarah Mahurt 10934 Dennington Rd. Fort Myers, FL 33913 Leroy Keyes Athletic Leadership Fellow https://connect.purdue.edu/s/jpcgivenow?dids=067845.067842&appealcode=18023 Center for Cancer Research https://connect.purdue.edu/s/pccr?_ga=2.200662766.1958259411.1647303183-1620152030.1647303183 Memorial services are planned for a later date.

Richard A Mahurt, 73, died peacefully at home March 15, 2022. He was born August 19, 1948 in East Liverpool, Ohio, grew up in Midland, PA and was a long-time resident of St. Croix, US Virgin Islands. He was preceded in death by his parents,... View Obituary & Service Information

The family of Richard Arlan Mahurt created this Life Tributes page to make it easy to share your memories.

Send flowers to the Mahurt family.