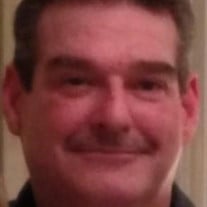 Ronald “Andy” Gene Anderson, 61, was called home to the Lord on January 21, 2022. Ronald was born on September 17, 1960 in Lapeer, Michigan to Ronald Lee (proceeded in death) and Betty Jean (Diller) Knowlton. He was proceeded in death by his stepfather Don Knowlton. He was a talented published writer. He loved hunting and fishing, especially in the UP with his brothers and friends, paranormal investigation, nature, music, and cooking. He loved to write and work on his beautiful home. He showed appreciation to the Armed Services and the Veteran’s any chance he could, and his admiration and patriotism was an extremely important part of his life. He loved his country. He worked as a Maintenance Engineer for Hilton Grand Vacations. He was the owner of A Lasting Memoir Publishing Company and previously worked for Whitehouse Printing. In the 80’s and 90’s he worked for various publishing companies in Michigan, and after moving to Florida, was the General Manager of King Richards Amusement Park in Naples. Ron was an amazing and loving husband, father, son, brother, and friend. He is survived by his wife, Gayle Kimmel Anderson, his son’s Michael Anderson and Steven (Lisa) Trevino, and daughter Alyssa (Albert)Bills. Stepdaughters Kristine (Timothy) Barrett and Angela (Eric) Talty. Brothers Ken (Karen) Anderson, Don (Cheryl) Anderson, Dave (Judy) Anderson, Joe (Lorraine) Anderson, and sister Penny (Dale) Lewis. Many grandchildren, nieces, nephews, and cousins. The loss of our Ron “Andy” is only quantifiable by our love for him, the love he gave to all who knew him, his beautiful happy smile, and the impact he had on so many lives. Ron was such a loving and sweet person; his laughter will be music to be missed. He will be missed, remembered and celebrated every day. In lieu of flowers, please consider donating to the Tunnel to Towers Foundation.

The family of Ronald Gene Anderson created this Life Tributes page to make it easy to share your memories.

Send flowers to the Anderson family.