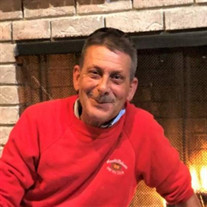 Stephen Lee Kilborn, 60, of Sebring died early Sunday, Nov. 14, 2021, at the home he recently began sharing with his love, Marilyn Milam. He had been bravely battling lung cancer for a second time when he passed away. Steve was born March 16, 1961, in Lake Wales, Fl., to Newton Charles and Anne Kilborn. His family moved to Sebring from Avon Park when Steve was a toddler. Steve grew up attending the Sebring Church of the Nazarene and never forgot the scriptures he learned from the Rev. Joe Benson, Edith Pepper, whom he and his siblings affectionally called Granny, and other members of the church. He especially loved Mathew 22:37: “You shall love the Lord your God with all your heart and with all your soul and with all your mind.” A product of Highlands County Public Schools, Steve attended DeSoto City, Fred Wild Elementary, and Sebring Middle schools. He was a member of the Sebring High School Class of 1980, and was in the Future Farmers of America, serving as president in 1978-79. Growing up in the blue-collar neighborhood of Highlands Homes, Steve spent his childhood riding bicycles and playing hide and seek with friends, baseball with the gang at Marge Skipper Field, and many a summer day swimming at Lake Jackson. During his high school years, he spent extra time with Ag teacher Steve Skipper who taught him the aspects of cattle ranching and farming. Following graduation, Steve owned and operated an irrigation company in Sebring for ten years before moving with his family to Alliance, Ohio in 1990. There, Steve worked for Mustang Products and was a supervisor for Andy’s Lawn Care, a major landscape company. He coached his sons’ flag football teams for several years as well. Steve moved to Charleston, W.Va., in 1998, and worked for Cory Bros. Produce, before settling down in Parkersburg, W.Va., where he worked for Sadler Landscape Company, heading its irrigation division. He later returned to Ohio to be closer to his sons. In February of 2012, Steve relocated to his beloved home state, moving to the Leesburg area to be near his sister and her family. While there, he owned a landscape company that served residents of The Villages and the surrounding area. As all of his friends and family know, Steve was a rascal and prankster, and relished a good joke. He was a hard worker, and a diehard fan of classic Rock n’ Roll and particularly enjoyed a cold beer while watching football on a crisp fall afternoon. He especially adored the USA, the Lord, the Miami Dolphins, and Ohio State University football. Steve also loved four-wheeling, fishing and hunting, and good ole Southern foods, including fried chicken, mashed potatoes, greens, and cornbread. More than anything though Steve cherished his family, especially his sons, including his youngest, Austin Kilborn, who served in the U.S. Army. He also loved Marilyn, a former classmate whom he reconnected with a year ago, and treasured his lifelong friendship with Maria Pepper Cameron. In addition to Austin (Megan) of Ohio, Steve is survived by sons, Jared Kilborn of Ohio and Dustin Kilborn of Florida; two grandsons, Dustin Jr., and Alexander Kilborn, both of Ohio; a newborn granddaughter, Nova, and two soon-to-be-born grandsons, Warrick James Kilborn (Austin’s first child) and Nash Dean Kilborn, (Jared’s first child). Steve is also survived by his sister, Rosemarie (Rosie) Dowell of Fruitland Park, and her children, Ginny Feathers, Jessica Gentry, Joshua High, and Abigail Dowell, who all live near her, and Jacob Dowell of Boca Raton, and a brother, Charles Kilborn of Pennsylvania. Also, other nephews and nieces and several great-nephews and nieces as well. He is proceeded in death by his father, Charles Kilborn, mother, Ann Kilborn Feldman, and his beloved sister DeeDee Wirick. Highlands Hammock State Park was an integral part of Steve’s childhood, and he and Marilyn had spent a lot of time there the past several months, and for that reason, his family decided to have his services at the park. Steve’s Celebration of Life, officiated by the Rev. Dr. Leroy Pepper, will take place beginning at Noon Saturday (Nov. 20) at the park’s amphitheater. Afterward, a Memorial Potluck Picnic will be held at the Bobcat Pavilion. All Steve’s friends and or former classmates are invited to attend the service, and bring finger foods to share at the picnic. Per Steve’s request, dress is casual and, “come as you are.” Guests can give their names at the gate to forgo paying an admission fee to the park, if needed. The family will soon have a private memorial service for Steve at Bradenton Beach, where his ashes will be scattered, according to his wishes. Arrangements are under the care of Gendron Funeral & Cremation Services Inc. located at 135 N Lime Avenue, Sarasota, FL 34237. 941-365-1767 www.gendronfuneralhome.com

Stephen Lee Kilborn, 60, of Sebring died early Sunday, Nov. 14, 2021, at the home he recently began sharing with his love, Marilyn Milam. He had been bravely battling lung cancer for a second time when he passed away. Steve was born March 16,... View Obituary & Service Information

The family of Stephen Lee Kilborn created this Life Tributes page to make it easy to share your memories.

Send flowers to the Kilborn family.