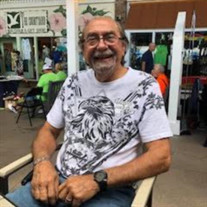 TONY LYNN CARTER JANUARY 3, 1947 – NOVEMBER 26, 2021 TONY LYNN CARTER (74) left this world on November 26, 2021; and went to a place in Heaven where Alzheimer’s does not exist. He was born on January 3, 1947, to Josephine Thompson Carter and William Glenroy Carter in Horse Cave, KY. Tony grew up in both Indianapolis, IN with his mother during his school year and on the family farm in the Rex community of Hart Co., KY, during the summers and holidays with his dad, his stepmother, Juanita Payton Carter, and his siblings. He was a member of Zion Baptist Church of the Rex community. As an adult he served with the Indiana National Guard; and apprenticed at International Harvester in Indianapolis. He retired as a Pattern Maker with Navistar. During his working years he resided in Indianapolis and Shelby Co. Indiana. In addition to his vocation, he was a wonder with his hands. He could build houses, take a car completely apart and put it back together better than before, and even fabricate parts if he could not find what he wanted or needed on the market. He was extremely talented. He spent his retired life either transitioning to his “happy place” in Lehigh Acres, FL, or living in his beautiful home there with his loving wife and primary care giver Darlene Fischer-Carter. Darlene’s family fully embraced Tony with love and concern throughout their marriage and during Tony’s long illness. Besides his parents, Tony was predeceased by his brother, Joe Thomas Carter; his sister, Anna Mary Carter (Michael Stepp) and his Carter and Thompson grandparents. He is survived by his loving wife, Darlene; his four children, Michael Glenn Carter, Michelle Lynn Carter Coffman, Joshua Fischer and Lou Ann McKain; four grandchildren, Nicholas Carter, Alexis Coffman, Samantha Coffman and Hailey Boyer; one aunt, Charline Richardson Carter Rich; a sister, Glenda Carol Carter Brown (Rodney), a brother, William Edwin Carter (Debbie); three nephews; numerous cousins and countless friends, and of course the entire Fischer family. The family wishes to thank Hope Hospice of Lehigh Acres, FL who worked tirelessly to make Tony’s last days and his home going comfortable. We are most thankful for their treatment of he and his family with compassion and dignity. Expressions of sympathy may be shown through donations in his memory to the Alzheimer’s charity of your choice, to the Moose Heart or Moose Haven funds, via the Moose Lodge #2266, 210 Homestead Road South, Lehigh Acres, FL 33936 or Kosair Charities, 982 Eastern Parkway, Louisville, KY 40217. A celebration of life will be held at a date to be determined in January, 2022 at the Moose Lodge #2266, and a celebration of life later this year in Indianapolis.

The family of Tony Lynn Carter created this Life Tributes page to make it easy to share your memories.

Send flowers to the Carter family.